The DISTANT VOICES exist because of the very sad death of Daisy Healy who was only 9 years old. She went to hospital with a treatable tooth infection, and never left. She never left because she was different. Because she looked different and had different needs. Little Daisy was just one of many victims who made their way into MENCAP'S Death by Indifference report.

I took her story to the FOURTH PLINTH to perform for an hour, as apart of Antony Gormley͛s One & Other, in 2009.  Over the years since, myself and the rest of The Distant Voices have tried to give a voice to the unheard. How do you show a wound? Is the question we ask again and again in performance and installation protests.

From 'I'm dancing on the Inside' (2009), a performance piece outside Parliament, by our multi-talented group of young disabled and non-disabled people. To Billboard Bomshell (2010), a national billboard campaign asking the question 'what's the cost of euthanasia?'. To touring nationally my play, TRUST - Dying for the NHS (2013). To creating a 20 foot puppet of a judge to protest the Marris Bill (2015), which the TV cameras couldn't keep their eyes (or lenses) off. To building him a friend, the Director of Public Prosecutions as a 15 foot puppet, pantomime dame, (2015). To touring my last play, 5 a Day (2017).

We're often bold and controversial, but we get a crowd, and do our part to help boost awareness of this vital issue.

THE DISTANT VOICES will make an appearance outside the Court of Appeal on Tuesday 1st May, to protest against Noel Conway’s continued efforts, with DIGNITY IN DYING, to change the law on assisted suicide.

This will be our biggest ever installation

is intended to bring to public attention, USING A POP-UP GRAVEYARD; the danger of legalising euthanasia. We will expose the myths, lies and propaganda used by DIGNITY IN DYING to bring a dangerous and unnecessary change to all our lives. 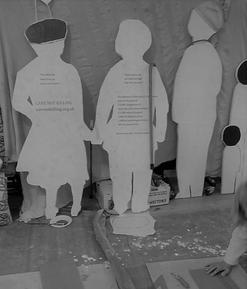 PROTESTS AND OTHER ACTIONS 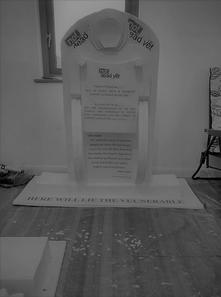 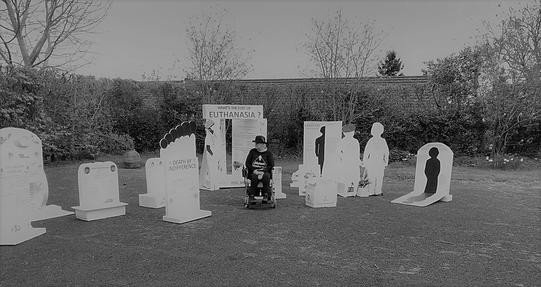